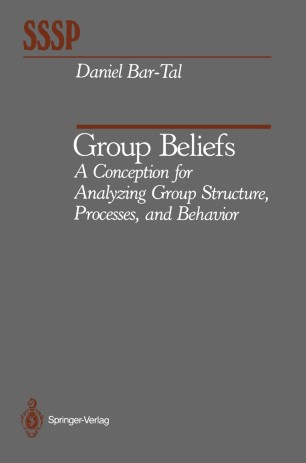 A Conception for Analyzing Group Structure, Processes, and Behavior

"Individuals who live in groups hold common beliefs which define their reality, not only as persons, but also as group members. This reality becomes especially important when group members become aware that they share beliefs and are convinced that these beliefs characterize them as a group. In this case common beliefs become group beliefs." With this statement, Dr. Bar-Tal begins his far-reaching analysis of beliefs as a group phenomenon. Group beliefs are shown to have important behavioral, cognitive, and affective implications for group members and the group as a whole. They may contribute to the behavioral direction a group takes, coordinate group activities, determine the intensity and involvement of group members, and influence the way group members affect the leaders. This book introduces and articulates the implications of a new concept of group beliefs, shedding new light on the structure and processes of groups, focusing on such phenomena as group formation, subgrouping, splits, mergence and group disintegration. By taking an interdisciplinary approach, this integrative conception opens new avenues to the study and understanding of group behavior.