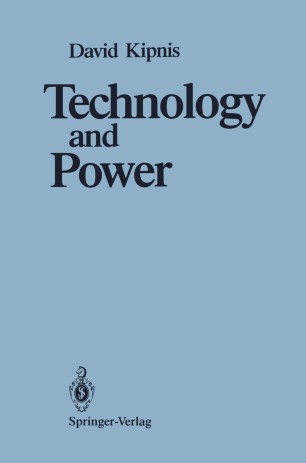 There is a dark side to human nature that is nurtured by the control of power. In an earlier book, The Powerholders, I I described several psychological principles that appear to govern the behavior of people who control and use social power. In particular, I examined how the successful use of power transformed, for the worse, the values and behavior of the influencing agent. My interest in the relation between technology and power grew out of reading David Howarth's Tahiti: A Paradise Lost,2 a description of the almost causal ways in which Western technology was used by early explorers and traders to obliterate the Tahitian civilization. In reflecting on what happened in Tahiti, what struck me was the similarity in the behavior of these explorers and traders to the behavior of the husbands, wives, and businessmen, in positions of power, that I wrote about in my earlier book. Technology and Power is concerned with the issue of how the added power provided by technology changes the behavior of people who control it. I describe these changes among managers at work, psychologists, physicians, and colonists. What unifies these disparate areas is the implacable logic of power. The seeming ease with which power promotes the derogation of those controlled by power provides, I believe, a needed perspective for viewing the many social problems generated by technology.