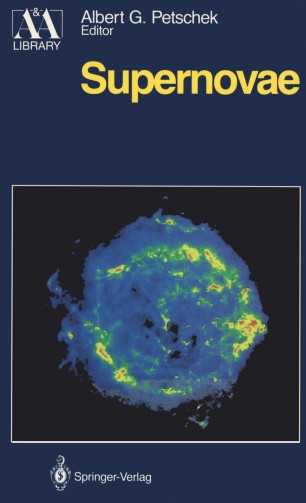 For millennia mankind has watched as the heavens move in their stately progression from night to night and from year to year, presaging with their changes the changing seasons. The sun, the moon, and the planets move in what appears to be an unchanging firmament, except occasionally when a new "star" appears. Among the new stars there are comets, novae, and finally supernovae, the subject of this book. Superstitious mankind regarded these events as significant portents and recorded them carefully so that we have records of supernovae that may reach back as far as 1300 B. C. (Clark and Stephenson, 1977; Murdin and Murdin, 1985). The Cygnus Loop, believed to be a 15,000-year-old supernova remnant at a distance of only 800 pc (Chevalier and Seward, 1988), must have awed our ancestors. Tycho's supernova of 1572, at a distance of 2500 pc, had a magnitude of -4. 0, comparable to Venus at its brightest, and Kepler's supernova of 1604 had a magnitude of - 3 or so. Thus the Cygnus Loop supernova might have had a magnitude of - 6 or so, and should have been readily visible in daytime. A supernova in Vela, about 8000 B. C. was comparably close, as was SN 1006, whose magnitude may have been -9. While most of the supernova records come from the Old World, the supernova of 1054 is recorded in at least one petroglyph in the American West.