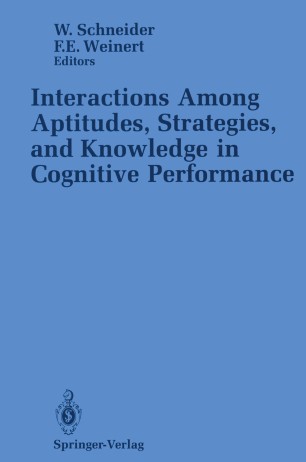 Interactions Among Aptitudes, Strategies, and Knowledge in Cognitive Performance

During the past two decades, a renewed interest in children's cognitive devel­ opment has stimulated numerous research activities that have been summarized in hundreds of books. In our view, the field of memory development provides a particularly nice example of the progress that has been made so far. Since John Flavell's landmark symposium on "What Is Memory Development the Development of?" in 1971, the question of what develops has been addressed in different ways, yielding a rather complex pattern of findings. A closer look at current research outcomes reveals that ways of describing and explaining de­ velopmental changes in memory performance have changed considerably during the past 20 years. That is, while individual differences in the use of cognitive strategies were conceived of as the most important predictors of individual dif­ ferences in memory performance in the 1970s, the crucial role of knowledge has been demonstrated in research conducted in the 1980s. More recent studies have repeatedly emphasized that neither changes in strategies nor knowledge alone is sufficient to explain general patterns of memory development: Here the claim is that strategies ahd different forms of knowledge (e. g. , world knowl­ edge, domain knowledge, or metacognitive knowledge) interact in rather com­ plex ways to achieve successful memory performance. We believe that this claim can be generalized to different fields dealing with intelligent information processing.