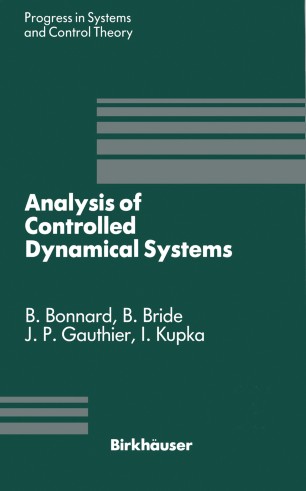 Proceedings of a Conference held in Lyon, France, July 1990

Part of the Progress in Systems and Control Theory book series (PSCT, volume 8)

The conference "Analysis of Controlled Dynamical Systems" was held in July 1990 at the University of LYON FRANCE. About hundred participants attended this conference which lasted four days : There were 50 speakers from departments of Engineering and Mathematics in east and west Europe, USA and USSR. The general subject of the conference was system theory. The main topics were optimal control, structure and control of nonlinear systems, stabilization and observers, differential algebra and systems theory, nonlinear aspects of Hoc theory, rigid and flexible mechanical systems, nonlinear analysis of signals. We are indebted to the scientific committee John BAILLIEUL, Michel FLIESS, Bronislaw JAKUBCZYCK, Hector SUSSMANN, Jan WILLEMS. We gratefully acknowledge the time and thought they gave to this task. We would also like to thank Chris BYRNES for arranging for the publication of these proceedings through the series "Progress in Systems and Control Theory"; BIRKHAUSER. Finally, we are very grateful to the following institutions who through their financial support contributed essentially to the success of this conference : CNRS, Special year " Systemes Dynamiques", DRET, MEN-DAGIC, GRECO-AUTOMATIQUE, Claude Bernard Lyon I University, Entreprise Rhone-Alpes International, Conseil General du RhOne, the cities of LYON and VILLEURBANNE.