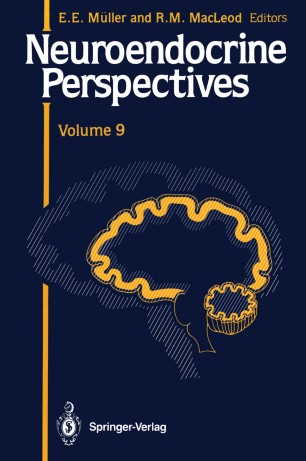 This issue of Neuroendocrine Perspectives, Volume 9, begins with a fascinating aspect of neurobiology: the steroid control of vertebrate behavior, in this case aggressive behavior. In the first chapter, Schlinger and Callard, after an extensive historical perspective of the behavioral effects of steroid hormones, review results of their own and others' laboratories on the hormonal basis of individual and sex-related differences in the intensity ofaggressive displays in birds. These studies provide evidence that brain aromatase exerts considerable control over both sex-dependent and individual differences in aggressive behavior by controllingestrogenreceptoroccupancyinsteroid-sensitivebrainregions. A greatdeal ofattention has been devoted to psychological, socio­ economic and cultural factors as potential causes of drug abuse and dependence, whereas the information on the neurobiologic effects of drugs of abuse is rather scanty. Wand and Froehlich address this topic in an exhaustive chapter on the effects of ethanol on the release, synthesis and posttranslational processing of hypothalamo-hypophyseal hormones. In addition, in keeping with neurophysiological and epidemiological evidence of a genetic susceptibility to alcohol addiction, they present data to indicate how the neuroendocrine system may function as a marker for genetic susceptibility to ethanol addition.