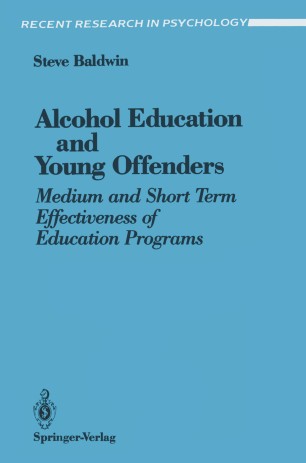 Since the establishment of the first alcohol education course (ABC) for young offenders in 1981, this fono of service delivery has been expanded across the United Kingdom. While some before-and-after data have been reported, no con­ trolled evaluations have been completed on effectiveness with this type of inter­ vention. The present research reports a series of evaluation studies to investigate the impact of ABCs on offending and drinking behavior. Young offenders were recruited from local courts. The first study, completed in Dundee, reported results from a comparative evaluation between two types of ABCs. As an attention-placebo study, one group received a behavioral ABC with program contents designed to reduce drinking and offending behaviors. Some dependent variable differences between the two groups were observed at follow-up. The second study was established in Glasgow as a replication of the main study. The third study used a quasi-experimental design to establish a no-intervention control group in the Perth courts. Young offenders were recruited to complete screening interviews, without any intervention. The intervention group was re­ cruited from courts in Forfar, a similar rural town. This group completed an infonoation-based ABC, using educational materials about alcohol and its effects. Some dependent variable differences were observed at follow-up. The fourth study was based in a Young Offender Institution at Forfar. Prerelease young offenders were randomly assigned to either a no-intervention control group or a behavioral ABC group. Some dependent variable differences were reported at follow-up.