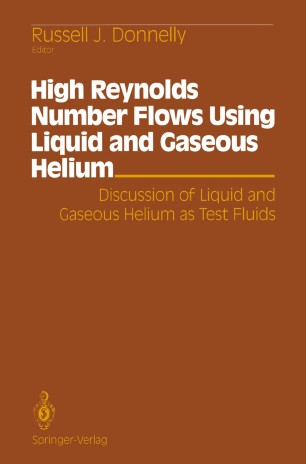 Discussion of Liquid and Gaseous Helium as Test Fluids

Liquid helium has been studied for its intrinsic interest through much of the 20th century. In the past decade, much has been learned about heat transfer in liquid helium because of the need to cool superconducting magnets and other devices. The topic of the Seventh Oregon Conference on Low Temperature Physics was an applied one, namely the use of liquid and gaseous helium to generate high Reynolds number flows. The low kinematic viscosity of liquid helium automatically makes high Reynolds numbers accessible and the question addressed in this conference was to explore various possibilities to see what practical devices might be built using liquid or gaseous helium. There are a number of possibilities: construction of a wind tunnel using critical helium gas, free surface testing, low speed flow facilities using helium I and helium ll. At the time of the conference, most consideration had been given to the last possibility because it seemed both possible and useful to build a flow facility which could reach unprecedented Reynolds numbers. Such a device could be useful in pure research for studying turbulence, and in applied research for testing models much as is done in a water tunnel. In order to examine these possibilities in detail, we invited a wide range of experts to Eugene in October 1989 to present papers on their own specialties and to listen to presentations on the liquid helium proposals.