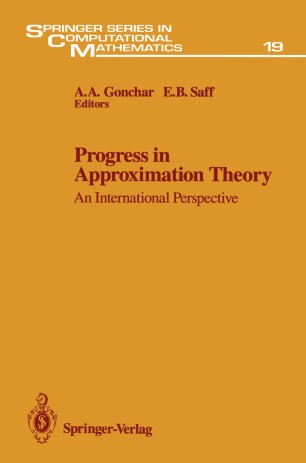 Designed to give a contemporary international survey of research activities in approximation theory and special functions, this book brings together the work of approximation theorists from North America, Western Europe, Asia, Russia, the Ukraine, and several other former Soviet countries. Contents include: results dealing with q-hypergeometric functions, differencehypergeometric functions and basic hypergeometric series with Schur function argument; the theory of orthogonal polynomials and expansions, including generalizations of Szegö type asymptotics and connections with Jacobi matrices; the convergence theory for Padé and Hermite-Padé approximants, with emphasis on techniques from potential theory; material on wavelets and fractals and their relationship to invariant measures and nonlinear approximation; generalizations of de Brange's in equality for univalent functions in a quasi-orthogonal Hilbert space setting; applications of results concerning approximation by entire functions and the problem of analytic continuation; and other topics.