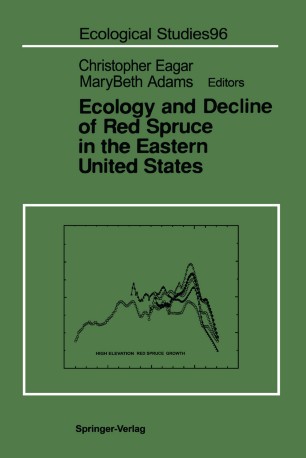 Ecology and Decline of Red Spruce in the Eastern United States

In the early 1980s there were several published reports of recent, unexplained increases in mortality of red spruce in the Adirondack Mountains and the northern Appalachian Mountains of the eastern United States. These reports coincided with documentation of reductions in radial growth of several species of pine in the southeastern United States, and with the severe, rapid, and widespread decline of Norway spruce, silver fir, and some hardwoods in central Europe. In all of these instances, atmospheric deposition was hypothesized as the cause of the decline. (Throughout this volume, we use the term "decline" to refer to a loosely synchronized regional-scale deterioration of tree health which is brought about by a combination of stress factors. These may be biotic or abiotic in nature, and the combinations may differ from site to site. ) Heated public debate about the causes and possible cures for these forest declines ensued. Through the course of this debate, it became clear that information about forest health and air pollution effects on forests was inadequate to meet policymakers' needs. Ecology and Decline of Red Spruce in the Eastern United States addresses that gap for eastern spruce­ fir forests and represents the culmination of a great deal of research conducted in recent years. The focus is on red spruce because the decline of red spruce was both dramatic and inexplicable and because of the great amount of information gathered on red spruce.