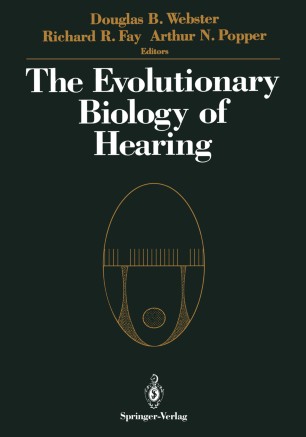 The Evolutionary Biology of Hearing

To develop a science of hearing that is intellectu­ The five-day conference was held at the Mote ally satisfying we must first integrate the diverse, Marine Laboratory in Sarasota, Florida, May - extensive body of comparative research into an 24, 1990. The invited participants came from the evolutionary context. The need for this integra­ fields of comparative anatomy, physiology, biophys­ tion, and a conceptual framework in which it could ics, animal behavior, psychophysics, evolutionary be structured, were demonstrated in landmark biology, ontogeny, and paleontology. Before the papers by van Bergeijk in 1967 and Wever in 1974. conference, preliminary manuscripts of the invited However, not since 1965, when the American papers were distributed to all participants. This facilitated - even encouraged - discussions through­ Society of Zoologists sponsored an evolutionary conference entitled ''The Vertebrate Ear;' has there out the conference which could be called, among other things, "lively. " The preview of papers, along been a group effort to assemble and organize our current knowledge on the evolutionary-as with the free exchange of information and opinion, opposed to comparative-biology of hearing. also helped improve the quality and consistency of In the quarter century since that conference the final manuscripts included in this volume. there have been major changes in evolutionary In addition to the invited papers, several studies concepts (e. g. , punctuated equilibrium), in sys­ were presented as posters during evening sessions.