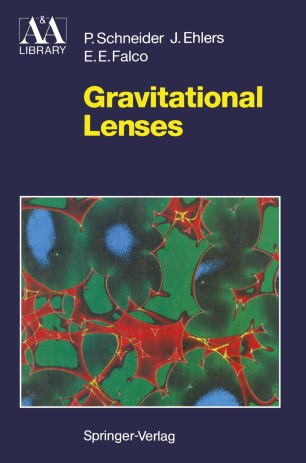 The theory, observations, and applications ofgravitational lensingconstitute one ofthe most rapidly growing branches ofextragalactic astrophysics. The deflection of light from very distant sources by intervening masses provides a unique possibility for the investigation of both background sources and lens mass distributions. Gravitational lensing manifestsitselfmost distinctly through multiply imaged QSOs and the formation of highly elongated im­ ages of distant galaxies ('arcs') and spectacular ring-like images of extra­ galactic radio sources. But the effects of gravitational light deflection are not limited to these prominent image configurations; more subtle, since not directly observable, consequences of lensing are the, possibly strong, mag­ nification of sources, which may permit observation of intrinsically fainter, or more distant, sources than would be visible without these natural tele­ scopes. Such light deflection can also affect the source counts of QSOs and of other compact extragalactic sources, and can lead to flux variability of sources owing to propagation effects. Trying to summarizethe theory and observationalstatus ofgravitational lensing in a monograph turned out to be a bigger problem than any of the authors anticipated when we started this project at the end of 1987, encour­ aged by Martin Harwit, who originally approached us. The development in the field has been very rapid during the last four years, both through the­ ory and through observation, and many sections have been rewritten several times, as the previous versions became out of date.