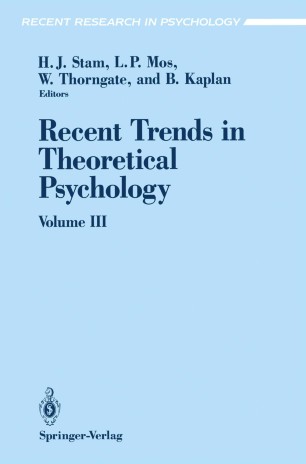 Selected Proceedings of the Fourth Biennial Conference of the International Society for Theoretical Psychology June 24–28, 1991

I was asked and, alas, with little reflection on the magnitude of the task, thoughtlessly consented, to take on the 'simple' job of writing a preface to the collection of essays comprising this volume. That I was asked to carry out this simple task was probably due to one consideration: I was the main representative of the host institution (Clark University) for the 1991 ISTP Conference, at which the talks, foreshadowing and outlining the 'extended remarks' here printed, were originally presented, and hence, as a token of gratitude, I was vouchsafed the honor of setting the stage. It did not dawn on me, until I began piecemeal to receive and accumulate, over a period of months, the remarkably diverse and heterogeneous essays precipitated by the conference, how mind-boggling it would be to pen a preface pertinent to such an aggregate of prima/acie unrelated articles. Typically, prefaces to collections of essays from different hands are attempts by the prefator or a pride of prefators to provide an overview, a concise map, of the complex terrain which readers are invited to enter; or to direct the attention of potential readers to what the editors take to be the essential or central themes of each of the variegated articles: a practice which, not infrequently and often not unjustifiably, irritates and even enrages individual authors, who object to the complexity, profundity, and nuanced character of their thought being reduced to clicMs and editorial equivalents of sound bites.