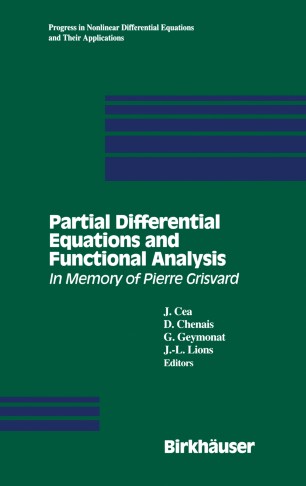 In Memory of Pierre Grisvard

Part of the Progress in Nonlinear Differential Equations and Their Applications book series (PNLDE, volume 22)

Pierre Grisvard, one of the most distinguished French mathematicians, died on April 22, 1994. A Conference was held in November 1994 out of which grew the invited articles contained in this volume. All of the papers are related to functional analysis applied to partial differential equations, which was Grisvard's specialty. Indeed his knowledge of this area was extremely broad. He began his career as one of the very first students of Jacques Louis Lions, and in 1965, he presented his "State Thesis" on interpolation spaces, using in particular, spectral theory for linear operators in Banach spaces. After 1970, he became a specialist in the study of optimal regularity for par­ tial differential equations with boundary conditions. He studied singulari­ ties coming from coefficients, boundary conditions, and mainly non-smooth domains, and left a legacy of precise results which have been published in journals and books. Pierre Grisvard spent most of his career as a full professor at the University of Nice, where he started in 1967. For shorter or longer periods, he visited several foreign countries, and collaborated with some of the most famous mathematicians in his field. He was also an excellent organizer and directed a large number of Ph.D. students. Finally, this volume contains a bibliography of Grisvard's works as well as one paper which he wrote and which has not been published before.