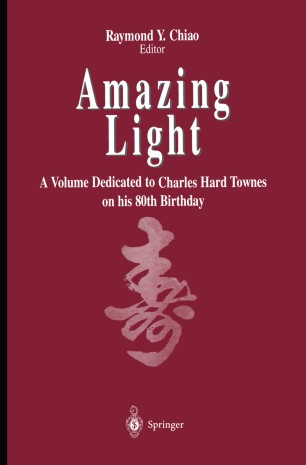 A Volume Dedicated To Charles Hard Townes On His 80th Birthday

This Festschrift is a collection of essays contributed by students, colleagues, and ad­ mirers to honor an eminent scholar on a special anniversary: Charles Hard Townes on the occasion of his 80th birthday, July 28, 1995. In 1964, Townes shared the Nobel Prize in physics with Alexander Mikhailovich Prokhorov and Nikolai Gen­ nadyevich Basov "for fundamental work in the field of quantum electronics, which has led to the construction of oscillators and amplifiers based on the maser-laser principle. " His contributions have covered a much wider area, however. His fruitful interests spanning several decades have included many scientific subjects, includ­ ing, microwave spectroscopy and astrophysics (other articles in this volume will expand further on this point). He has also contributed to public service, having served as the chairman of the Science and Technology Advisory Committee for NASA's Apollo program, and as a member and vice chairman of the President's Science Advisory Committee. As the enormous breadth of contributions from his students shows, he has educated scholars who are now in a wide range of fields. The contributions from his many admirers, among whom are nine fellow Nobel laureates, attest to his impact on many disciplines ranging from electrical engi­ neering to medicine. His influence extends even to theology, as is indicated by one essay. The broadly international character of this Festschrift reflects his deep belief in the international, universal nature of science.