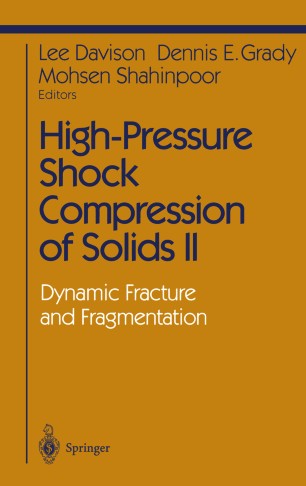 This volume concerns the fracture and fragmentation of solid materials that occurs when they are subjected to extremes of stress applied at the highest possible rates. The plan for the volume is to address experimental, theoretical, and com­ putational aspects of high-rate dynamic fracture and fragmentation, with emphasis on recent work. We begin with several chapters in which the emphasis falls on experimental methods and observations. These chapters address both macroscopic responses and the microscopic cause of these re­ sponses. This is followed by several chapters emphasizing modeling-the physical explanation and mathematical representation of the observations. Some of the models are deterministic, while others focus on the stochastic aspects of the observations. Often, the ov\!rall objective of investigation of dynamic fracture and fragmentation phenomena is provision of a means for predicting the entire course of an event that begins with a stimulus such as an impact and proceeds through a complicated deformation and fracture pro­ cess that results in disintegration of the body and formation of a rapidly expanding cloud of debris fragments. Analysis of this event usually involves development of a continuum theory and computer code that captures the experimental observations by incorporating models of the important pheno­ mena into a comprehensive description of the deformation and fracture pro­ cess. It is to this task that the work of the last few chapters is devoted.