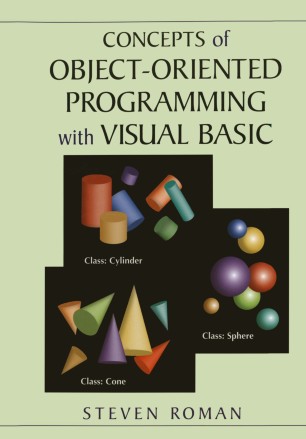 This book is about object-oriented programming and how it is implemented in Microsoft Visual Basic. Accordingly, the book has two separate, but inter­ twined, goals. The first is to describe the general concepts of object orientation and the second is to describe how to do object-oriented programming in Visual Basic. I intend this to be a short, no-nonsense book that can be read through once and then easily referred to at later times. (Long stories about a mythical company and its programming problems are seldom interesting the first time through, let alone the second, third or fourth times!) To read this book, you need only a minimal acquaintance with Visual Basic. In particular, I assume you can construct a simple Visual Basic program and have some rudimentary knowledge of fundamental programming tech­ niques. This book does not teach Visual Basic - it teaches you how to pro­ gram Visual Basic in an object-oriented way. The issue here is not how much Visual Basic you already know - it is that you want to learn about object­ oriented programming techniques. With regard to the first goal of the book, it is my feeling that a discussion of the underlying concepts of object orientation Oust what is an object, a class, encapsulation, abstraction, and so on) is essential in order to take full advan­ tage of any object-oriented language. Simply put, it will help you understand what you are doing if you know why you are doing it.