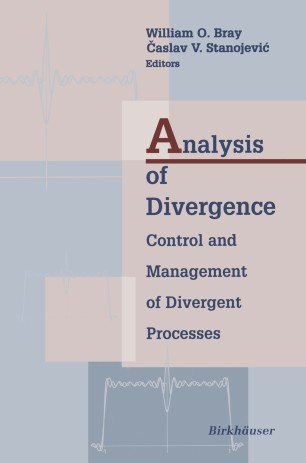 Control and Management of Divergent Processes

The 7th International Workshop in Analysis and its Applications (IWAA) was held at the University of Maine, June 1-6, 1997 and featured approxi­ mately 60 mathematicians. The principal theme of the workshop shares the title of this volume and the latter is a direct outgrowth of the workshop. IWAA was founded in 1984 by Professor Caslav V. Stanojevic. The first meeting was held in the resort complex Kupuri, Yugoslavia, June 1-10, 1986, with two pilot meetings preceding. The Organization Committee to­ gether with the Advisory Committee (R. P. Boas, R. R. Goldberg, J. P. Kahne) set forward the format and content of future meetings. A certain number of papers were presented that later appeared individually in such journals as the Proceedings of the AMS, Bulletin of the AMS, Mathematis­ chen Annalen, and the Journal of Mathematical Analysis and its Applica­ tions. The second meeting took place June 1-10, 1987, at the same location. At the plenary session of this meeting it was decided that future meetings should have a principal theme. The theme for the third meeting (June 1- 10, 1989, Kupuri) was Karamata's Regular Variation. The principal theme for the fourth meeting (June 1-10, 1990, Kupuri) was Inner Product and Convexity Structures in Analysis, Mathematical Physics, and Economics. The fifth meeting was to have had the theme, Analysis and Foundations, organized in cooperation with Professor A. Blass (June 1-10, 1991, Kupuri).