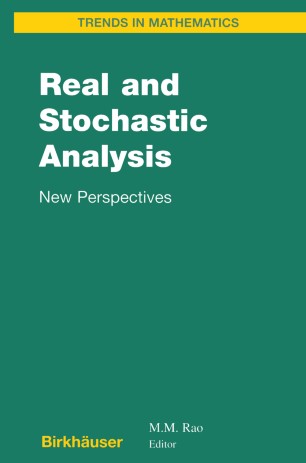 As in the case of the two previous volumes published in 1986 and 1997, the purpose of this monograph is to focus the interplay between real (functional) analysis and stochastic analysis show their mutual benefits and advance the subjects. The presentation of each article, given as a chapter, is in a research-expository style covering the respective topics in depth. In fact, most of the details are included so that each work is essentially self contained and thus will be of use both for advanced graduate students and other researchers interested in the areas considered. Moreover, numerous new problems for future research are suggested in each chapter. The presented articles contain a substantial number of new results as well as unified and simplified accounts of previously known ones. A large part of the material cov­ ered is on stochastic differential equations on various structures, together with some applications. Although Brownian motion plays a key role, (semi-) martingale theory is important for a considerable extent. Moreover, noncommutative analysis and probabil­ ity have a prominent role in some chapters, with new ideas and results. A more detailed outline of each of the articles appears in the introduction and outline to assist readers in selecting and starting their work. All chapters have been reviewed.