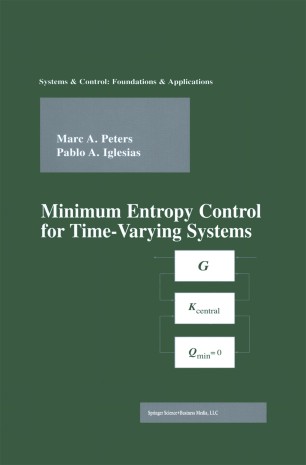 One of the main goals of optimal control theory is to provide a theoretical basis for choosing an appropriate controller for whatever system is under consideration by the researcher or engineer. Two popular norms that have proved useful are known as H-2 and H - infinity control. The first has been particularly applicable to problems arising in the aerospace industry. However, most industrial problems are badly modeled and the second norm proved to be more appropriate when the actual conditions of the problem did not conform to the stipulated conditions of the theory. This book takes the topic of H-infinity control as a point of departure and pursues an improved controller design which has been suggested in the mainstream of robust control. Its main theme, minimum entropy control, provides a means of trading off some of the features of other control problems. The book is aimed at research workers in networking systems as well as those in operator theory and linear multivariable control. The use of stochastic methods makes the book also of importance to the circuits and systems community. CONTENTS: Preface • Introduction • Preliminaries • Induced Operator Norms • Discrete-Time Entropy • Connections With Related Optimal Control Problems • Minimum Entropy Control • Continuous-Time Entropy • A. Proof of Theorem • B. Proof of Theorem • Bibliography • Notation • Index