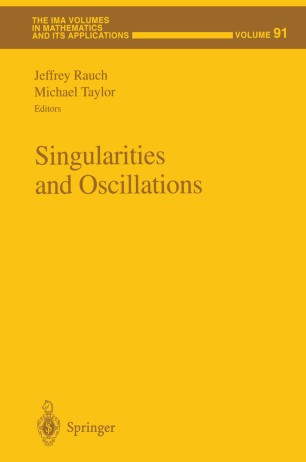 Part of the The IMA Volumes in Mathematics and its Applications book series (IMA, volume 91)

This IMA Volume in Mathematics and its Applications SINGULARITIES AND OSCILLATIONS is based on the proceedings of a very successful one-week workshop with the same title, which was an integral part of the 1994-1995 IMA program on "Waves and Scattering. " We would like to thank Joseph Keller, Jeffrey Rauch, and Michael Taylor for their excellent work as organizers of the meeting. We would like to express our further gratitude to Rauch and Taylor, who served as editors of the proceedings. We also take this opportunity to thank the National Science Foun­ dation (NSF), the Army Research Office (ARO) and the Office of Naval Research (ONR), whose financial support made the workshop possible. Avner Friedman Robert Gulliver v PREFACE Thestudyofsingularitiesand oscillationsofwaves has progressed along several fronts. A key common feature is the presence of a small scale in the solutions. Recent emphasis has been on nonlinear waves. Nonlinear problems are generally less amenable than linear problems to broad unified approaches. As a result there is a justifiable tendency to concentrate on problems of particular geometric or physical interest. This volume con­ tains a multiplicity of approaches brought to bear on problems varying from the formation ofcaustics and the propagation ofwaves at a boundary to the examination ofviscous boundary layers. There is an examination of the foundations of the theory of high-frequency electromagnetic waves in a dielectric or semiconducting medium. Unifying themes are not entirely absent from nonlinear analysis.