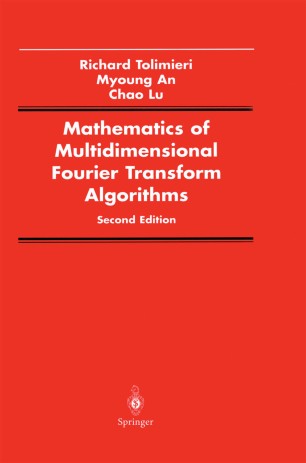 Fourier transforms of large multidimensional data sets arise in many fields --ranging from seismology to medical imaging. The rapidly increasing power of computer chips, the increased availability of vector and array processors, and the increasing size of the data sets to be analyzed make it both possible and necessary to analyze the data more than one dimension at a time. The increased freedom provided by multidimensional processing, however, also places intesive demands on the communication aspects of the computation, making it difficult to write code that takes all the algorithmic possiblities into account and matches these to the target architecture. This book develops algorithms for multi-dimensional Fourier transforms that yield highly efficient code on a variety of vector and parallel computers. By emphasizing the unified basis for the many approaches to one-dimensional and multidimensional Fourier transforms, this book not only clarifies the fundamental similarities, but also shows how to exploit the differences in optimizing implementations. This book will be of interest not only to applied mathematicians and computer scientists, but also to seismologists, high-energy physicists, crystallographers, and electrical engineers working on signal and image processing. Topics covered include: tensor products and the fast Fourier transform; finite Abelian groups and their Fourier transforms; Cooley- Tukey and Good-Thomas algorithms; lines and planes; reduced transform algorithms; field algorithms; implementation on Risc and parallel