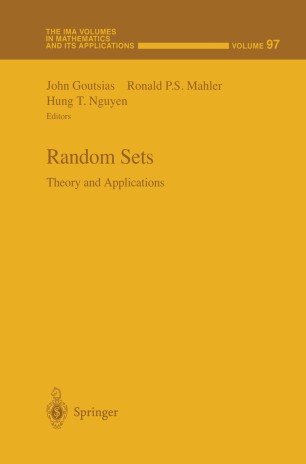 Part of the The IMA Volumes in Mathematics and its Applications book series (IMA, volume 97)

This IMA Volume in Mathematics and its Applications RANDOM SETS: THEORY AND APPLICATIONS is based on the proceedings of a very successful 1996 three-day Summer Program on "Application and Theory of Random Sets." We would like to thank the scientific organizers: John Goutsias (Johns Hopkins University), Ronald P.S. Mahler (Lockheed Martin), and Hung T. Nguyen (New Mexico State University) for their excellent work as organizers of the meeting and for editing the proceedings. We also take this opportunity to thank the Army Research Office (ARO), the Office ofNaval Research (0NR), and the Eagan, MinnesotaEngineering Center ofLockheed Martin Tactical Defense Systems, whose financial support made the summer program possible. Avner Friedman Robert Gulliver v PREFACE "Later generations will regard set theory as a disease from which one has recovered. " - Henri Poincare Random set theory was independently conceived by D.G. Kendall and G. Matheron in connection with stochastic geometry. It was however G.