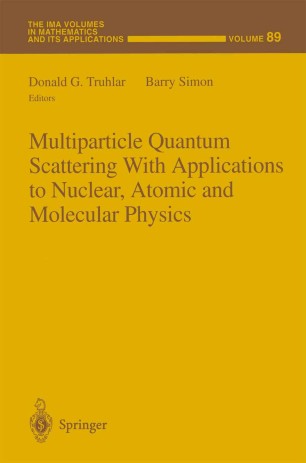 Part of the The IMA Volumes in Mathematics and its Applications book series (IMA, volume 89)

This IMA Volume in Mathematics and its Applications MULTIPARTICLE QUANTUM SCATTERING WITH APPLICATIONS TO NUCLEAR, ATOMIC AND MOLECULAR PHYSICS is based on the proceedings of a workshop with the same title, which was an integral part of the 1994-1995 IMA program on "Waves and Scattering." We would like to thank Donald G. Truhlar and Barry Simon for their ex­ cellent work as organizers of this meeting and as editors of the proceedings. We also take this opportunity to thank the National Science Foundation (NSF), the Army Research Office (ARO), and the Office of Naval Research (ONR), whose financial support made the workshop possible. A vner Friedman Robert Gulliver v PREFACE The workshop on Multiparticle Quantum Scattering with Applications to Nuclear, Atomic, and Molecular Physics was held June 12-16, 1995 at the Institute for Mathematics and Its Applications in the University of Min­ nesota Twin Cities campus as part of the 1994-95 Program on Waves and Scattering. There were about seventy participants including the plenary lecturers whose contributions are included in this volume. The workshop was preceded by a two-day tutorial featuring lectures by Donald J. Kouri and Gian Michele Graf, and we are pleased that both Professors Graf and Kouri were able to write up their tutorials as opening chapters of this volume.