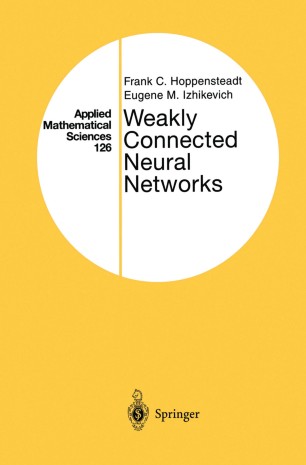 This book is devoted to an analysis of general weakly connected neural networks (WCNNs) that can be written in the form (0.1) m Here, each Xi E IR is a vector that summarizes all physiological attributes of the ith neuron, n is the number of neurons, Ii describes the dynam­ ics of the ith neuron, and gi describes the interactions between neurons. The small parameter € indicates the strength of connections between the neurons. Weakly connected systems have attracted much attention since the sec­ ond half of seventeenth century, when Christian Huygens noticed that a pair of pendulum clocks synchronize when they are attached to a light­ weight beam instead of a wall. The pair of clocks is among the first weakly connected systems to have been studied. Systems of the form (0.1) arise in formal perturbation theories developed by Poincare, Liapunov and Malkin, and in averaging theories developed by Bogoliubov and Mitropolsky.