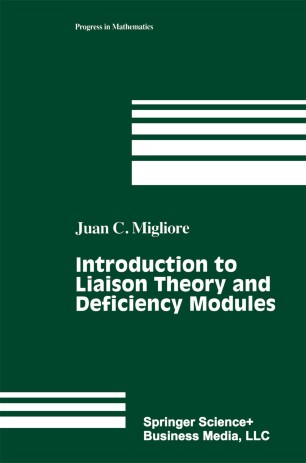 Part of the Progress in Mathematics book series (PM, volume 165)

In the fall of 1992 I was invited by Professor Changho Keem to visit Seoul National University and give a series of talks. I was asked to write a monograph based on my talks, and the result was published by the Global Analysis Research Center of that University in 1994. The monograph treated deficiency modules and liaison theory for complete intersections. Over the next several years I continually thought of improvements and additions that I would like to make to the manuscript, and at the same time my research led me in directions that gave me a fresh perspective on much of the material, especially in the direction of liaison theory. This re­ sulted in a dramatic change in the focus of this manuscript, from complete intersections to Gorenstein ideals, and a substantial amount of additions and revisions. It is my hope that this book now serves not only as an introduction to a beautiful subject, but also gives the reader a glimpse at very recent developments and an idea of the direction in which liaison theory is going, at least from my perspective. One theme which I have tried to stress is the tremendous amount of geometry which lies at the heart of the subject, and the beautiful interplay between algebra and geometry. Whenever possible I have given remarks and examples to illustrate this interplay, and I have tried to phrase the results in as geometric a way as possible.