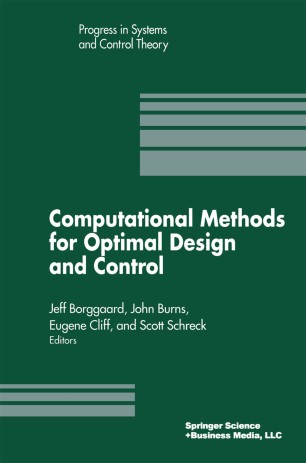 Part of the Progress in Systems and Control Theory book series (PSCT, volume 24)

This volume contains the proceedings of the Second International Workshop on Optimal Design and Control, held in Arlington, Virginia, 30 September-3 Octo­ ber, 1997. The First Workshop was held in Blacksburg, Virginia in 1994. The proceedings of that meeting also appeared in the Birkhauser series on Progress in Systems and Control Theory and may be obtained through Birkhauser. These workshops were sponsored by the Air Force Office of Scientific Re­ search through the Center for Optimal Design and Control (CODAC) at Vrrginia Tech. The meetings provided a forum for the exchange of new ideas and were designed to bring together diverse viewpoints and to highlight new applications. The primary goal of the workshops was to assess the current status of research and to analyze future directions in optimization based design and control. The present volume contains the technical papers presented at the Second Workshop. More than 65 participants from 6 countries attended the meeting and contributed to its success. It has long been recognized that many modern optimal design problems are best viewed as variational and optimal control problems. Indeed, the famous problem of determining the body of revolution that produces a minimum drag nose shape in hypersonic How was first proposed by Newton in 1686. Optimal control approaches to design can provide theoretical and computational insight into these problems. This volume contains a number of papers which deal with computational aspects of optimal control.