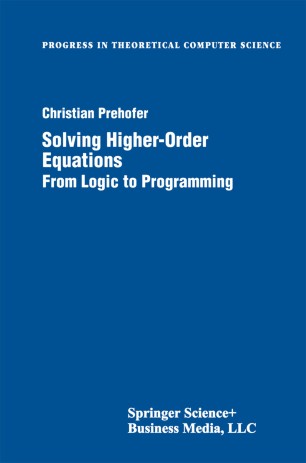 From Logic to Programming

This monograph develops techniques for equational reasoning in higher-order logic. Due to its expressiveness, higher-order logic is used for specification and verification of hardware, software, and mathematics. In these applica­ tions, higher-order logic provides the necessary level of abstraction for con­ cise and natural formulations. The main assets of higher-order logic are quan­ tification over functions or predicates and its abstraction mechanism. These allow one to represent quantification in formulas and other variable-binding constructs. In this book, we focus on equational logic as a fundamental and natural concept in computer science and mathematics. We present calculi for equa­ tional reasoning modulo higher-order equations presented as rewrite rules. This is followed by a systematic development from general equational rea­ soning towards effective calculi for declarative programming in higher-order logic and A-calculus. This aims at integrating and generalizing declarative programming models such as functional and logic programming. In these two prominent declarative computation models we can view a program as a logical theory and a computation as a deduction.