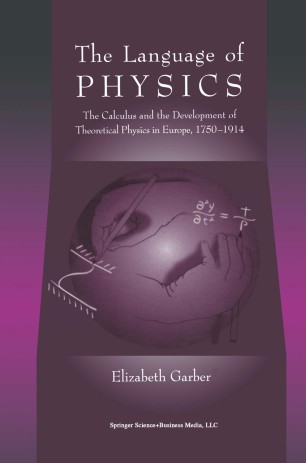 The Language of Physics

The Calculus and the Development of Theoretical Physics in Europe, 1750–1914

This work is the first explicit examination of the key role that mathematics has played in the development of theoretical physics and will undoubtedly challenge the more conventional accounts of its historical development. Although mathematics has long been regarded as the "language" of physics, the connections between these independent disciplines have been far more complex and intimate than previous narratives have shown.

This study encompasses engagements across discipline boundaries and many nations rom the ear of Euler and Bernoulli o that of Hilbert and Einstein. At all times physicists and mathematicians retained their distinct sets of disciplinary standards and goals. Interactions within historical ears are handled using the standards of the time to define mathematics and physics. In this context, the works of Lagrange, Laplace, Fourier, Jacobi, William Thomson, Maxwell, Helmholtz, and many others are discussed, and by 1870, it is evident that the essentials of modern theoretical physics are in place. The epilogue, spanning the decades from 1870 to the First World War, deals with the decline of these interactions and the building of new connections. It is particularly significant that these new patterns of interactions became paradigmatic for the rest of the twentieth century.

The unique perspectives concerning the history of theoretical physics will undoubtedly cause some raised eyebrows, as the author convincingly demonstrates that practices, methods, and language shaped the development of the field, and are a key to understanding the mergence of the modern academic discipline. Mathematicians and physicists, as well as historians of both disciplines, will find this provocative work of great interest.