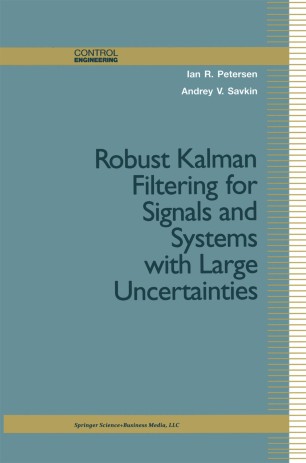 Robust Kalman Filtering for Signals and Systems with Large Uncertainties

A significant shortcoming of the state space control theory that emerged in the 1960s was its lack of concern for the issue of robustness. However, in the design of feedback control systems, robustness is a critical issue. These facts led to great activity in the research area of robust control theory. One of the major developments of modern control theory was the Kalman Filter and hence the development of a robust version of the Kalman Filter has become an active area of research. Although the issue of robustness in filtering is not as critical as in feedback control (where there is always the issue of instability to worry about), research on robust filtering and state estimation has remained very active in recent years. However, although numerous books have appeared on the topic of Kalman filtering, this book is one of the first to appear on robust Kalman filtering. Most of the material presented in this book derives from a period of research collaboration between the authors from 1992 to 1994. However, its origins go back earlier than that. The first author (LR. P. ) became in­ terested in problems of robust filtering through his research collaboration with Dr. Duncan McFarlane. At this time, Dr. McFarlane was employed at the Melbourne Research Laboratories ofBHP Ltd. , a large Australian min­ erals, resources, and steel processing company.