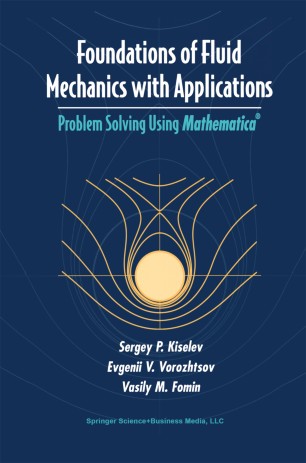 Foundations of Fluid Mechanics with Applications

Fluid mechanics (FM) is a branch of science dealing with the investi­ gation of flows of continua under the action of external forces. The fundamentals of FM were laid in the works of the famous scientists, such as L. Euler, M. V. Lomonosov, D. Bernoulli, J. L. Lagrange, A. Cauchy, L. Navier, S. D. Poisson, and other classics of science. Fluid mechanics underwent a rapid development during the past two centuries, and it now includes, along with the above branches, aerodynamics, hydrodynamics, rarefied gas dynamics, mechanics of multi phase and reactive media, etc. The FM application domains were expanded, and new investigation methods were developed. Certain concepts introduced by the classics of science, however, are still of primary importance and will apparently be of importance in the future. The Lagrangian and Eulerian descriptions of a continuum, tensors of strains and stresses, conservation laws for mass, momentum, moment of momentum, and energy are the examples of such concepts and results. This list should be augmented by the first and second laws of thermodynamics, which determine the character and direction of processes at a given point of a continuum. The availability of the conservation laws is conditioned by the homogeneity and isotrop­ icity properties of the Euclidean space, and the form of these laws is related to the Newton's laws. The laws of thermodynamics have their foundation in the statistical physics.