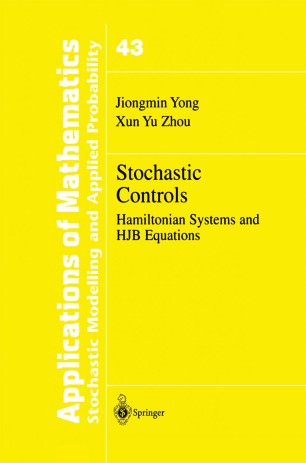 Part of the Applications of Mathematics book series (SMAP, volume 43)

As is well known, Pontryagin's maximum principle and Bellman's dynamic programming are the two principal and most commonly used approaches in solving stochastic optimal control problems. * An interesting phenomenon one can observe from the literature is that these two approaches have been developed separately and independently. Since both methods are used to investigate the same problems, a natural question one will ask is the fol­ lowing: (Q) What is the relationship betwccn the maximum principlc and dy­ namic programming in stochastic optimal controls? There did exist some researches (prior to the 1980s) on the relationship between these two. Nevertheless, the results usually werestated in heuristic terms and proved under rather restrictive assumptions, which were not satisfied in most cases. In the statement of a Pontryagin-type maximum principle there is an adjoint equation, which is an ordinary differential equation (ODE) in the (finite-dimensional) deterministic case and a stochastic differential equation (SDE) in the stochastic case. The system consisting of the adjoint equa­ tion, the original state equation, and the maximum condition is referred to as an (extended) Hamiltonian system. On the other hand, in Bellman's dynamic programming, there is a partial differential equation (PDE), of first order in the (finite-dimensional) deterministic case and of second or­ der in the stochastic case. This is known as a Hamilton-Jacobi-Bellman (HJB) equation.