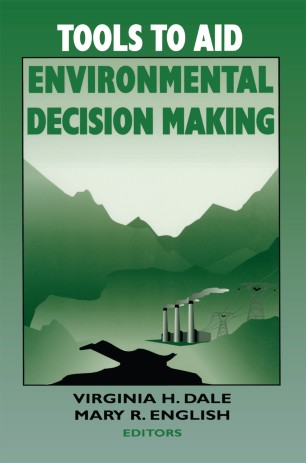 Environmental decision making is, like politics, mostly local. In fact, making decisions about the environment at the subnationallevel-in state, regional, and local jurisdictions-is a lot like politics. For resolving environ­ mental issues demands, but often resists, a balance between deeply held feelings and stark confrontations among opposing views. This volume describes tools that should make the decision maker's lot a bit more tolerable. The authors would be the last to suggest that these decision-aiding tools will somehow bring a benign order to issues that reach to people's fundamental values. What they can help do is to keep the debate focused on the important issues, to serve up useful options, and to narrow the range of disagreement. Even this is a challenging assignment. Still, why bother? The chief reason is that the locus of environmental decision making has, in the past decade or so, shifted from the national to the subnationallevel (a convenient, if colorless, term to denote the hurly­ burly of environmental controversy outside the Washington Beltway). For example, New England has taken a regional stand on tropospheric ozone control, and California requires automotive pollution controls that some other jurisdictions have partially adopted. This shift is a profound but not unexpected result of the way environmental policy has evolved since the modern environmental movement began around the late 1960s. Back then, the pendulum was swinging the other way.