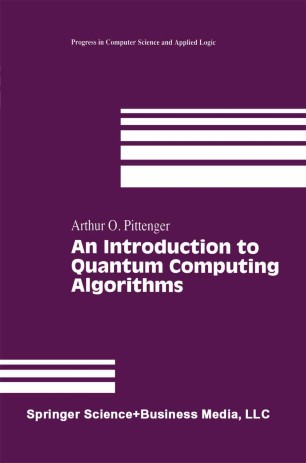 An Introduction to Quantum Computing Algorithms

In 1994 Peter Shor [65] published a factoring algorithm for a quantum computer that finds the prime factors of a composite integer N more efficiently than is possible with the known algorithms for a classical com­ puter. Since the difficulty of the factoring problem is crucial for the se­ curity of a public key encryption system, interest (and funding) in quan­ tum computing and quantum computation suddenly blossomed. Quan­ tum computing had arrived. The study of the role of quantum mechanics in the theory of computa­ tion seems to have begun in the early 1980s with the publications of Paul Benioff [6]' [7] who considered a quantum mechanical model of computers and the computation process. A related question was discussed shortly thereafter by Richard Feynman [35] who began from a different perspec­ tive by asking what kind of computer should be used to simulate physics. His analysis led him to the belief that with a suitable class of "quantum machines" one could imitate any quantum system.