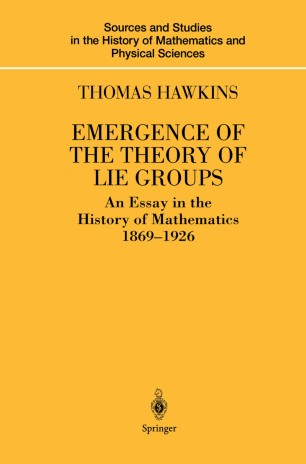 Emergence of the Theory of Lie Groups

Written by the recipient of the 1997 MAA Chauvenet Prize for mathematical exposition, this book tells how the theory of Lie groups emerged from a fascinating cross fertilization of many strains of 19th and early 20th century geometry, analysis, mathematical physics, algebra and topology. The reader will meet a host of mathematicians from the period and become acquainted with the major mathematical schools. The first part describes the geometrical and analytical considerations that initiated the theory at the hands of the Norwegian mathematician, Sophus Lie. The main figure in the second part is Weierstrass'student Wilhelm Killing, whose interest in the foundations of non-Euclidean geometry led to his discovery of almost all the central concepts and theorems on the structure and classification of semisimple Lie algebras. The scene then shifts to the Paris mathematical community and Elie Cartans work on the representation of Lie algebras. The final part describes the influential, unifying contributions of Hermann Weyl and their context: Hilberts Göttingen, general relativity and the Frobenius-Schur theory of characters. The book is written with the conviction that mathematical understanding is deepened by familiarity with underlying motivations and the less formal, more intuitive manner of original conception. The human side of the story is evoked through extensive use of correspondence between mathematicians. The book should prove enlightening to a broad range of readers, including prospective students of Lie theory, mathematicians, physicists and historians and philosophers of science.