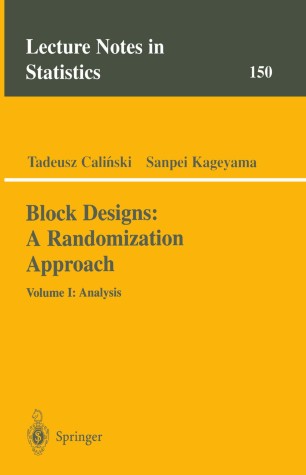 In most of the literature on block designs, when considering the analysis of experimental results, it is assumed that the expected value of the response of an experimental unit is the sum of three separate components, a general mean parameter, a parameter measuring the effect of the treatment applied and a parameter measuring the effect of the block in which the experimental unit is located. In addition, it is usually assumed that the responses are uncorrelated, with the same variance. Adding to this the assumption of normal distribution of the responses, one obtains the so-called "normal-theory model" on which the usual analysis of variance is based. Referring to it, Scheffe (1959, p. 105) writes that "there is nothing in the 'normal-theory model' of the two-way layout . . . that reflects the increased accuracy possible by good blocking. " Moreover, according to him, such a model "is inappropriate to those randomized-blocks experiments where the 'errors' are caused mainly by differences among the experimental units rather than measurement errors. " In view of this opinion, he has devoted one of the chapters of his book (Chapter 9) to randomization models, being convinced that "an understanding of the nature of the error distribution generated by the physical act of randomization should be part of our knowledge of the basic theory of the analysis of variance.