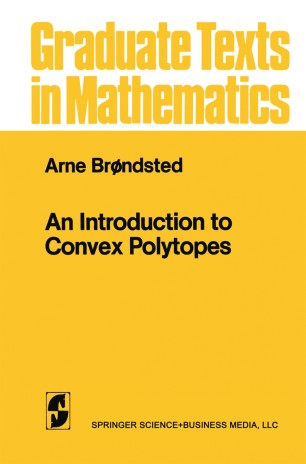 An Introduction to Convex Polytopes

The aim of this book is to introduce the reader to the fascinating world of convex polytopes. The highlights of the book are three main theorems in the combinatorial theory of convex polytopes, known as the Dehn-Sommerville Relations, the Upper Bound Theorem and the Lower Bound Theorem. All the background information on convex sets and convex polytopes which is m~eded to under­ stand and appreciate these three theorems is developed in detail. This background material also forms a basis for studying other aspects of polytope theory. The Dehn-Sommerville Relations are classical, whereas the proofs of the Upper Bound Theorem and the Lower Bound Theorem are of more recent date: they were found in the early 1970's by P. McMullen and D. Barnette, respectively. A famous conjecture of P. McMullen on the charac­ terization off-vectors of simplicial or simple polytopes dates from the same period; the book ends with a brief discussion of this conjecture and some of its relations to the Dehn-Sommerville Relations, the Upper Bound Theorem and the Lower Bound Theorem. However, the recent proofs that McMullen's conditions are both sufficient (L. J. Billera and C. W. Lee, 1980) and necessary (R. P. Stanley, 1980) go beyond the scope of the book. Prerequisites for reading the book are modest: standard linear algebra and elementary point set topology in [R1d will suffice.