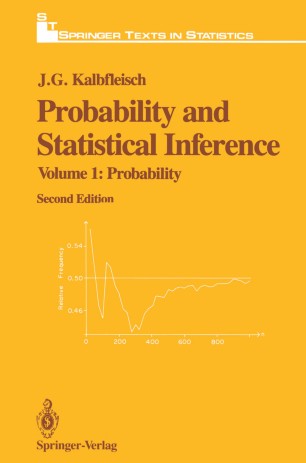 This book is in two volumes, and is intended as a text for introductory courses in probability and statistics at the second or third year university level. It emphasizes applications and logical principles rather than math­ ematical theory. A good background in freshman calculus is sufficient for most of the material presented. Several starred sections have been included as supplementary material. Nearly 900 problems and exercises of varying difficulty are given, and Appendix A contains answers to about one-third of them. The first volume (Chapters 1-8) deals with probability models and with mathematical methods for describing and manipulating them. It is similar in content and organization to the 1979 edition. Some sections have been rewritten and expanded-for example, the discussions of independent random variables and conditional probability. Many new exercises have been added. In the second volume (Chapters 9-16), probability models are used as the basis for the analysis and interpretation of data. This material has been revised extensively. Chapters 9 and 10 describe the use of the like­ lihood function in estimation problems, as in the 1979 edition. Chapter 11 then discusses frequency properties of estimation procedures, and in­ troduces coverage probability and confidence intervals. Chapter 12 de­ scribes tests of significance, with applications primarily to frequency data.