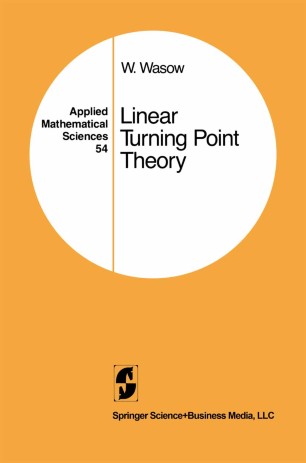 My book "Asymptotic Expansions for Ordinary Differential Equations" published in 1965 is out of print. In the almost 20 years since then, the subject has grown so much in breadth and in depth that an account of the present state of knowledge of all the topics discussed there could not be fitted into one volume without resorting to an excessively terse style of writing. Instead of undertaking such a task, I have concentrated, in this exposi­ tion, on the aspects of the asymptotic theory with which I have been particularly concerned during those 20 years, which is the nature and structure of turning points. As in Chapter VIII of my previous book, only linear analytic differential equations are considered, but the inclusion of important new ideas and results, as well as the development of the neces­ sary background material have made this an exposition of book length. The formal theory of linear analytic differential equations without a parameter near singularities with respect to the independent variable has, in recent years, been greatly deepened by bringing to it methods of modern algebra and topology. It is very probable that many of these ideas could also be applied to the problems concerning singularities with respect to a parameter, and I hope that this will be done in the near future. It is less likely, however, that the analytic, as opposed to the formal, aspects of turning point theory will greatly benefit from such an algebraization.