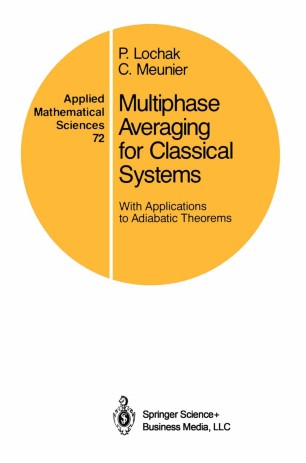 With Applications to Adiabatic Theorems

In the past several decades many significant results in averaging for systems of ODE's have been obtained. These results have not attracted a tention in proportion to their importance, partly because they have been overshadowed by KAM theory, and partly because they remain widely scattered - and often untranslated - throughout the Russian literature. The present book seeks to remedy that situation by providing a summary, including proofs, of averaging and related techniques for single and multiphase systems of ODE's. The first part of the book surveys most of what is known in the general case and examines the role of ergodicity in averaging. Stronger stability results are then obtained for the special case of Hamiltonian systems, and the relation of these results to KAM Theory is discussed. Finally, in view of their close relation to averaging methods, both classical and quantum adiabatic theorems are considered at some length. With the inclusion of nine concise appendices, the book is very nearly self-contained, and should serve the needs of both physicists desiring an accessible summary of known results, and of mathematicians seeing an introduction to current areas of research in averaging.