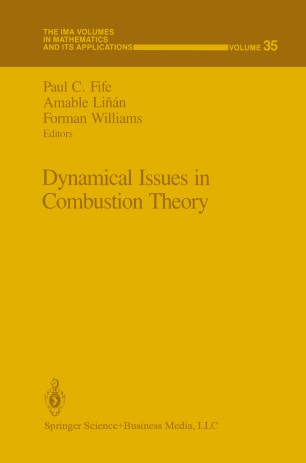 Part of the The IMA Volumes in Mathematics and its Applications book series (IMA, volume 35)

This IMA Volume in Mathematics and its Applications DYNAMICAL ISSUES IN COMBUSTION THEORY is based on the proceedings of a workshop which was an integral part of the 1989-90 IMA program on "Dynamical Systems and their Applications." The aim of this workshop was to cross-fertilize research groups working in topics of current interest in combustion dynamics and mathematical methods applicable thereto. We thank Shui-Nee Chow, Martin Golubitsky, Richard McGehee, George R. Sell, Paul Fife, Amable Liiian and Foreman Williams for organizing the meeting. We especially thank Paul Fife, Amable Liiilin and Foreman Williams for editing the proceedings. We also take this opportunity to thank those agencies whose financial support made the workshop possible: the Army Research Office, the National Science Foundation and the Office of Naval Research. Avner Friedman Willard Miller, Jr. ix PREFACE The world ofcombustion phenomena is rich in problems intriguing to the math­ ematical scientist. They offer challenges on several fronts: (1) modeling, which involves the elucidation of the essential features of a given phenomenon through physical insight and knowledge of experimental results, (2) devising appropriate asymptotic and computational methods, and (3) developing sound mathematical theories. Papers in the present volume, which are based on talks given at the Workshop on Dynamical Issues in Combustion Theory in November, 1989, describe how all of these challenges have been met for particular examples within a number of common combustion scenarios: reactiveshocks, low Mach number premixed reactive flow, nonpremixed phenomena, and solid propellants.