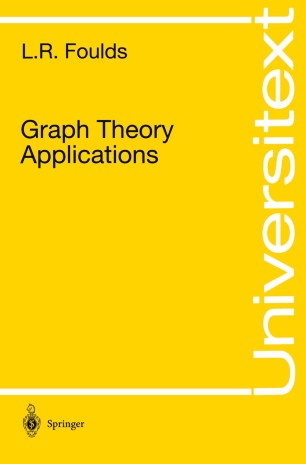 Over the last 30 years graph theory has evolved into an important math­ ematical tool in the solution of a wide variety of problems in many areas of society. The purpose of this book is to present selected topics from this theory that have been found useful and to point out various applications. Some important theoretical topics have been omitted as they are not es­ sential for the applications in Part II. Hence Part I should not be seen as a well-rounded treatise on the theory of graphs. Some effort has been made to present new applications that do not use merely the notation and ter­ minology of graphs but do actually implement some mathematical results from graph theory. It has been written for final undergraduate year or first year graduate students in engineering, mathematics, computer science, and operations research, as well as researchers and practitioners with an inter­ est in graph theoretic modelling. Suggested plans for the reading of the book by people with these interests are given later. The book comprises two parts. The first is a brief introduction to the mathematical theory of graphs. The second is a discussion on the applications of this material to some areas in the subjects previously mentioned. It is, of course, possi­ ble to read only the first part to attempt to gain an appreciation of the mathematical aspects of graph theory. However even the purest of mathe­ maticians is strongly recommended to delve seriously into the second part.