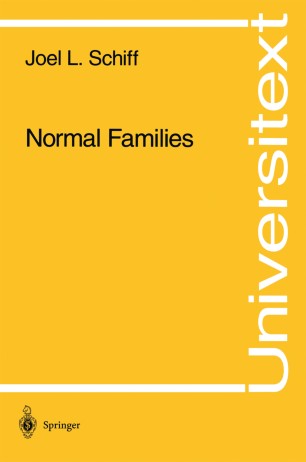 A book on the subject of normal families more than sixty years after the publication of Montel's treatise Ler;ons sur les familles normales de fonc­ tions analytiques et leurs applications is certainly long overdue. But, in a sense, it is almost premature, as so much contemporary work is still being produced. To misquote Dickens, this is the best of times, this is the worst of times. The intervening years have seen developments on a broad front, many of which are taken up in this volume. A unified treatment of the classical theory is also presented, with some attempt made to preserve its classical flavour. Since its inception early this century the notion of a normal family has played a central role in the development of complex function theory. In fact, it is a concept lying at the very heart of the subject, weaving a line of thought through Picard's theorems, Schottky's theorem, and the Riemann mapping theorem, to many modern results on meromorphic functions via the Bloch principle. It is this latter that has provided considerable impetus over the years to the study of normal families, and continues to serve as a guiding hand to future work. Basically, it asserts that a family of analytic (meromorphic) functions defined by a particular property, P, is likely to be a normal family if an entire (meromorphic in