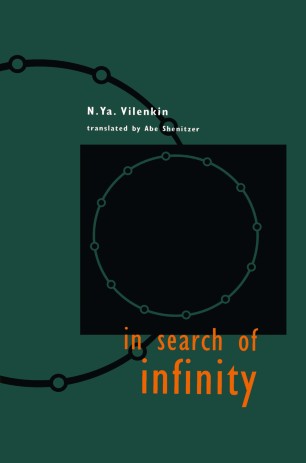 In Search of Infinity

The concept of infinity has been for hundreds of years one of the most fascinating and elusive ideas to tantalize the minds of scholars and lay people alike. The theory of infinite sets lies at the heart of much of mathematics, yet is has produced a series of paradoxes that have led many scholars to doubt the soundness of it foundations. The author of this book presents a popular-level account of the roads followed by human thought in attempts to understand the idea of the infinite in mathematics and physics. In doing so, he brings to the general reader a deep insight into the nature of the problem and its importance to an understanding of our world.

"When I read the first edition of the book, about 20 years ago, I was carried away by Vilenkin’s storytelling and his ability to bring subtle mathematical ideas down to earth. He stretches our imagination and educates our intuition…The second edition improves on the first by omission of some routine material about finite properties of sets, and increased attention to infinity. There is a wealth of new material on the position of infinity in human thought, from philosophy to physics, and also on its role in the history of mathematics. In particular, there are now biographical notes on over 100 mathematicians.

Abe Shenitzer’s elegant translation makes this a rare work of literature---a serious mathematical book that will be read from over to cover." ---John Stillwell, Monash University, Australia