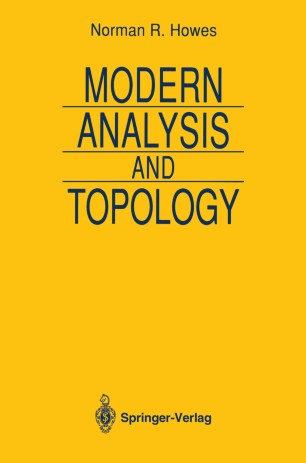 The purpose of this book is to provide an integrated development of modern analysis and topology through the integrating vehicle of uniform spaces. It is intended that the material be accessible to a reader of modest background. An advanced calculus course and an introductory topology course should be adequate. But it is also intended that this book be able to take the reader from that state to the frontiers of modern analysis and topology in-so-far as they can be done within the framework of uniform spaces. Modern analysis is usually developed in the setting of metric spaces although a great deal of harmonic analysis is done on topological groups and much offimctional analysis is done on various topological algebraic structures. All of these spaces are special cases of uniform spaces. Modern topology often involves spaces that are more general than uniform spaces, but the uniform spaces provide a setting general enough to investigate many of the most important ideas in modern topology, including the theories of Stone-Cech compactification, Hewitt Real-compactification and Tamano-Morita Para­ compactification, together with the theory of rings of continuous functions, while at the same time retaining a structure rich enough to support modern analysis.