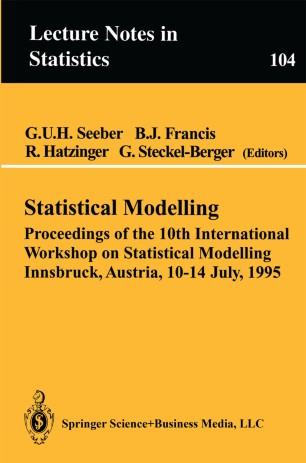 This volume presents the published proceedings of the lOth International Workshop on Statistical Modelling, to be held in Innsbruck, Austria from 10 to 14 July, 1995. This workshop marks an important anniversary. The inaugural workshop in this series also took place in Innsbruck in 1986, and brought together a small but enthusiastic group of thirty European statisticians interested in statistical modelling. The workshop arose out of two G LIM conferences in the U. K. in London (1982) and Lancaster (1985), and from a num­ ber of short courses organised by Murray Aitkin and held at Lancaster in the early 1980s, which attracted many European statisticians interested in Generalised Linear Modelling. The inaugural workshop in Innsbruck con­ centrated on GLMs and was characterised by a number of features - a friendly and supportive academic atmosphere, tutorial sessions and invited speakers presenting new developments in statistical modelling, and a very well organised social programme. The academic programme allowed plenty of time for presentation and for discussion, and made available copies of all papers beforehand. Over the intervening years, the workshop has grown substantially, and now regularly attracts over 150 participants. The scope of the workshop is now much broader, reflecting the growth in the subject of statistical modelling over ten years. The elements ofthe first workshop, however, are still present, and participants always find the meetings relevant and stimulating.