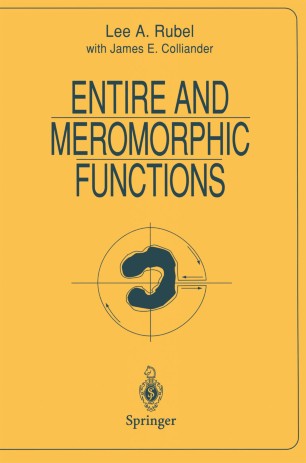 Mathematics is a beautiful subject, and entire functions is its most beautiful branch. Every aspect of mathematics enters into it, from analysis, algebra, and geometry all the way to differential equations and logic. For example, my favorite theorem in all of mathematics is a theorem of R. NevanJinna that two functions, meromorphic in the whole complex plane, that share five values must be identical. For real functions, there is nothing that even remotely corresponds to this. This book is an introduction to the theory of entire and meromorphic functions, with a heavy emphasis on Nevanlinna theory, otherwise known as value-distribution theory. Things included here that occur in no other book (that we are aware of) are the Fourier series method for entire and mero­ morphic functions, a study of integer valued entire functions, the Malliavin­ Rubel extension of Carlson's Theorem (the "sampling theorem"), and the first-order theory of the ring of all entire functions, and a final chapter on Tarski's "High School Algebra Problem," a topic from mathematical logic that connects with entire functions. This book grew out of a set of classroom notes for a course given at the University of Illinois in 1963, but they have been much changed, corrected, expanded, and updated, partially for a similar course at the same place in 1993. My thanks to the many students who prepared notes and have given corrections and comments.