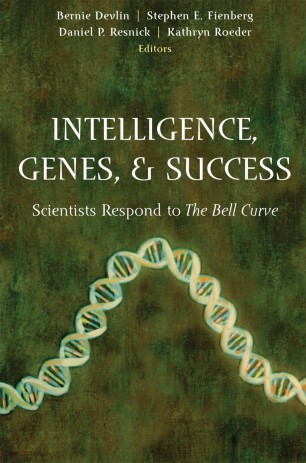 Scientists Respond to The Bell Curve

This is author-approved bcc. If it is too long, delete the last sentence in each of the biographies. THE BELL CURVE by Richard Herrnstein and Charles Murray, a best selling book published in 1994, set off a hailstorm of controversy about the relationships among IQ, genetics, and various social outcomes, including welfare dependency, crime, and earnings. Much of the public reaction to the book was polemical and did not focus on the details of the science and in particular on the validity of the statistical arguments that underlie the books's conclusions. A detailed understanding of the arguments in THE BELL CURVE requires knowledge about (i) statistical models for genetic heritability, (ii) factor analysis, especially as it has been applied to the analysis of IQ tests, (iii) logistic regression and multiple regression analyses,and (iv) causal modelling and alternative statistical frameworks for making inference from longitudinal data. In this volume a group of statisticians and social scientists have assembled a scientific response to THE BELL CURVE. The sixteen chapters begin by presenting an overview of the scientific and statistical issues and summarize the material in Herrnstein and Murray's book. Then separate chapters by various experts deal with more focused issues, including reanalyses of data relied upon by the authors of THE BELL CURVE. The final chapters consider some of the implications of the work described in the book for American public policy and scientific research. BERNIE DEVLIN is Program Director of the Computational Genetics Program at the University of Pittsburgh Medical Center. He serves on