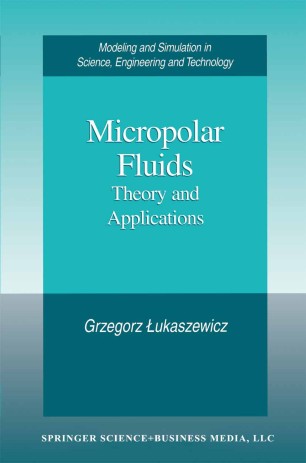 Micropolar fluids are fluids with microstructure. They belong to a class of fluids with nonsymmetric stress tensor that we shall call polar fluids, and include, as a special case, the well-established Navier-Stokes model of classical fluids that we shall call ordinary fluids. Physically, micropolar fluids may represent fluids consisting of rigid, randomly oriented (or spherical) particles suspended in a viscous medium, where the deformation of fluid particles is ignored. The model of micropolar fluids introduced in [65] by C. A. Eringen is worth studying as a very well balanced one. First, it is a well-founded and significant generalization of the classical Navier-Stokes model, covering, both in theory and applications, many more phenomena than the classical one. Moreover, it is elegant and not too complicated, in other words, man­ ageable to both mathematicians who study its theory and physicists and engineers who apply it. The main aim of this book is to present the theory of micropolar fluids, in particular its mathematical theory, to a wide range of readers. The book also presents two applications of micropolar fluids, one in the theory of lubrication and the other in the theory of porous media, as well as several exact solutions of particular problems and a numerical method. We took pains to make the presentation both clear and uniform.