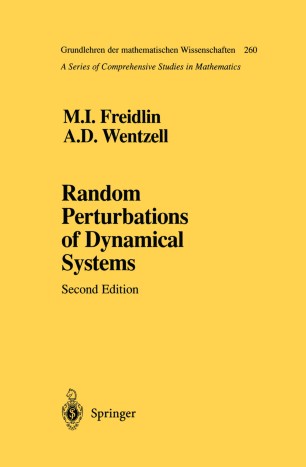 The first edition of this book was published in 1979 in Russian. Most of the material presented was related to large-deviation theory for stochastic pro­ cesses. This theory was developed more or less at the same time by different authors in different countries. This book was the first monograph in which large-deviation theory for stochastic processes was presented. Since then a number of books specially dedicated to large-deviation theory have been pub­ lished, including S. R. S. Varadhan [4], A. D. Wentzell [9], J. -D. Deuschel and D. W. Stroock [1], A. Dembo and O. Zeitouni [1]. Just a few changes were made for this edition in the part where large deviations are treated. The most essential is the addition of two new sections in the last chapter. Large deviations for infinite-dimensional systems are briefly conside:red in one new section, and the applications of large-deviation theory to wave front prop­ agation for reaction-diffusion equations are considered in another one. Large-deviation theory is not the only class of limit theorems arising in the context of random perturbations of dynamical systems. We therefore included in the second edition a number of new results related to the aver­ aging principle. Random perturbations of classical dynamical systems under certain conditions lead to diffusion processes on graphs. Such problems are considered in the new Chapter 8.